Of the 3.5 million students enrolling in college for the first time in fall 2017, 74 percent or 2.6 million students persisted as of fall 2018, by continuing enrollment or attaining a credential at any higher education institution, according to the newly released National Student Clearinghouse Research Center’s Persistence and Retention Snapshot Report.

The first-year persistence rate is slightly higher today than it was eight years ago (by 2.2 percentage points), but in the past several years it has barely changed. This means that more than a quarter of all entering students each year left college within their first year, even after accounting for those who transferred to a different institution. The data reveals wide persistence gaps among different types of starting institutions, across student racial/ethnic lines, and across major fields.

“This is the first time the Research Center analyzed major field- and program-level student persistence and retention rates,” said Doug Shapiro, Executive Director, National Student Clearinghouse Research Center. “The likelihood of continuing beyond the first year varies depending on the starting major, with students in Engineering bachelor’s degree programs five percentage points more likely to persist than those majoring in business BA programs. This provides an important lens for understanding academic and transition issues early during the first year, and can help students see what it takes to succeed in college. 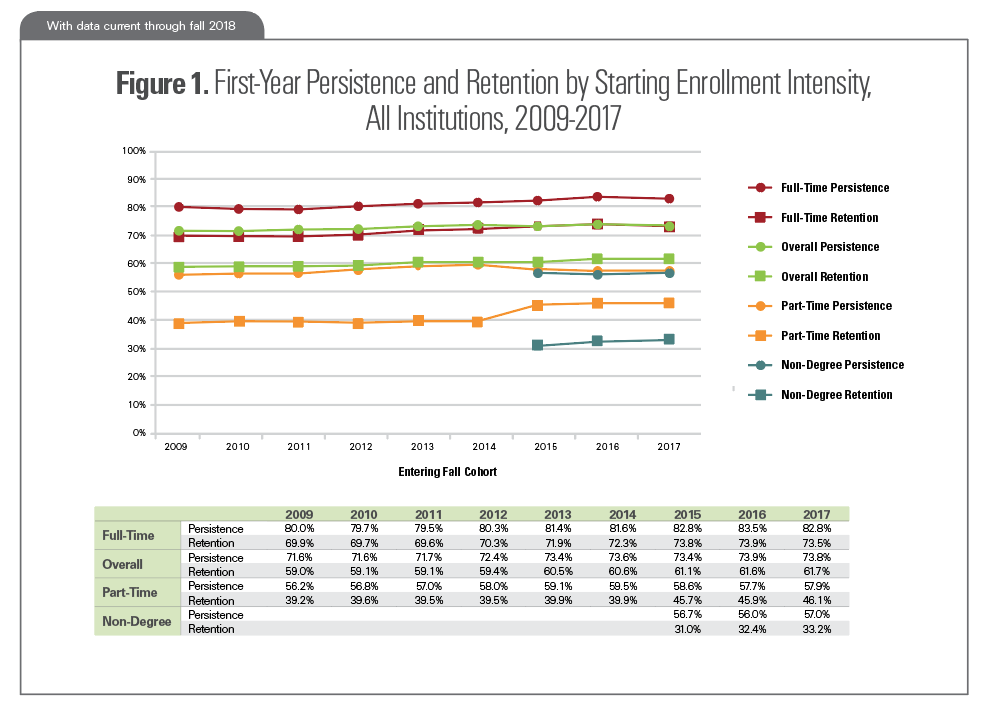 Among the five most popular majors for students in bachelor’s degree programs, the persistence rates are:

Defined as continued enrollment (or completion) at any higher education institution, persistence captures both those who return to the starting institution (retention rate) and those who transfer to a different institution (transfer-out rate). Our data found that Liberal Arts and Humanities or Health-related bachelor’s degree program majors were more likely than Engineering majors to have transferred to another institution by their second year.

Among the five most popular majors for the fall 2017 entering students in associate degree programs, the persistence rates are:

Likewise, Liberal Arts and Humanities majors in associate degree programs had the highest transfer-out rate (11.4 percent) and the 2nd highest retention rate (54.7 percent), resulting in the highest persistence rate of the top five popular majors. The high transfer-out rate is consistent with the fact that these majors are often designed to prepare students for transfer to four-year institutions.

Of first-time students who sought an undergraduate-level certificate, 58.8 percent persisted through the second year, either by attaining a certificate or continuing enrollment.

The persistence rates for the top five popular majors in undergraduate certificate programs are:

This is the first time the Research Center analyzed major field- and program-level student persistence and retention rates.

Watch Highlights from the Release of Our 2019 Some College, No Degree Report