In its second annual national level report, the National Student Clearinghouse® Research Center™ released benchmarks for high schools to compare their graduates’ college transition rates nationwide, including those serving low income and minority students. The report covers public and private high schools graduating more than 3.5 million students during the past four years or over a quarter of all U.S. high school graduates each year, from all 50 states.

The High School Benchmarks Report: National College Progression Rates was created by the Research Center in 2013. The inaugural High School Benchmarks report, released October 2013, covered high schools graduating more than 2.3 million students over three years. The increase in data coverage this year reflects the growing number of high schools and districts that are able to measure the college enrollment and progression outcomes of their graduates through the National Student Clearinghouse’s StudentTracker® educational research service.

“This report draws with bold relief the disparities in college access that are aligned with income levels in our schools. As a nation, we must do all we can to address the educational challenges facing students at low-income schools. The National Student Clearinghouse Research Center points the way with these valuable benchmarks, empowering principals and superintendents to develop meaningful goals and drive improvement on objectively measured outcomes.”

Report findings for the class of 2013, who enrolled in college the following fall, include: 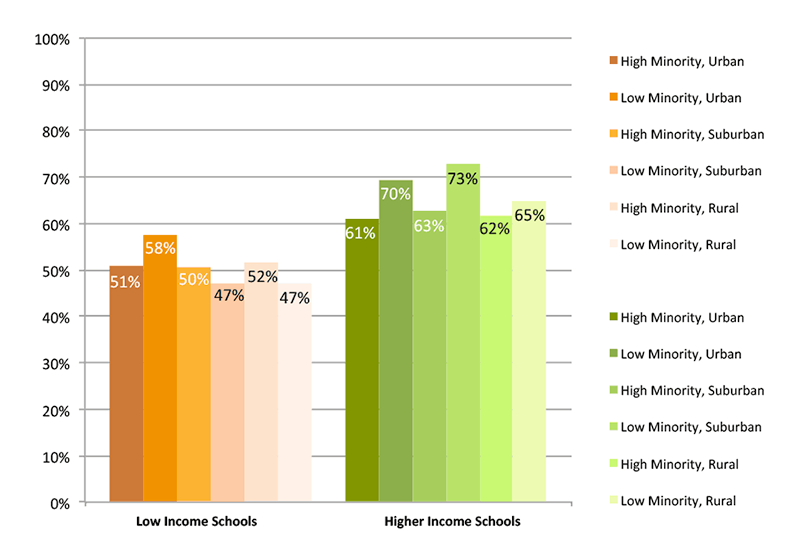 Seventy three percent of students who graduated from these high schools in 2013 enrolled college immediately after high school graduation. In general, among the three school characteristics considered, poverty level was the most consistent correlate to college enrollment rates. Students from high schools with a larger number of low income students had lower college enrollment rates than schools with mostly higher income students, regardless of the minority or geographic category that the school fell into.

The report also found that students from higher income and low minority suburban schools had the highest college enrollment rate among public non-charter schools. Seventy-three percent of graduates from these high schools in 2013 enrolled in college immediately after high school. Students from these schools also had the highest share of their students enrolled in private colleges and universities.

“We’re excited to continue to expand the findings of last year’s national High School Benchmarks report and build a more comprehensive look at high school-to-college transition rates. This information helps educators to see where they stand against other schools like them, and helps policymakers to see the important factors that contribute to college enrollment.”

This year’s report introduces, for the first time, an additional resource in the form of percentile distributions of school-level outcomes in each category. The percentile distributions show that, even among the lowest-performing categories of schools, there is often a wide range of outcomes, with some schools performing markedly above or below the average. Access to percentiles gives high schools stronger tools for measuring their students’ progress.

Take a look at our 2014 High School Benchmarks Report infographic