Only 60,000 of More Than 1 Million Community College Students Transferred With a Credential, Research Center’s Transfer and Mobility Report Reveals

Only 60,000 students out of more than 1 million who started postsecondary education at a two-year institution transferred after receiving a certificate or an associate’s degree, and more than 350,000 community college students transferred to another institution without a degree, according to a new report released today by the National Student Clearinghouse Research Center.

“Community colleges play an incredibly important role in our higher education ecosystem, but this new research shows only a small number of community college students transfer to a four-year institution with a credential,” said Jason Taylor, assistant professor of educational leadership and policy, University of Utah. “The research also suggests that hundreds of thousands of community college transfer students could benefit from reverse transfer programs that help them complete associate’s degrees they’ve earned.”

In addition, within their first six years, more than 1 million of the 2.8 million students continued their studies at a different institution, resulting in an overall transfer rate of 38 percent. Almost two in five of the students who began their post-secondary career in fall 2011 enrolled in more than one institution within six years before earning a bachelor’s degree.

“The national transfer statistics show that student mobility is diverse and complex,” said Doug Shapiro, Executive Director of the Research Center. “This report helps institutions go beyond first-time, full-time cohorts to understand non-traditional students, part-time and full-time, who transfer in and out of multiple institutions.”

The report analyzes student enrollment patterns across two-year and four-year, public and private institutions, and examines the distribution of transfer and mobility across state lines and over multiple years. For the first time, this report also includes transfer patterns disaggregated by race and ethnicity, providing insight into how different populations and traditionally underrepresented groups navigate the postsecondary pipeline in comparison to their peers. 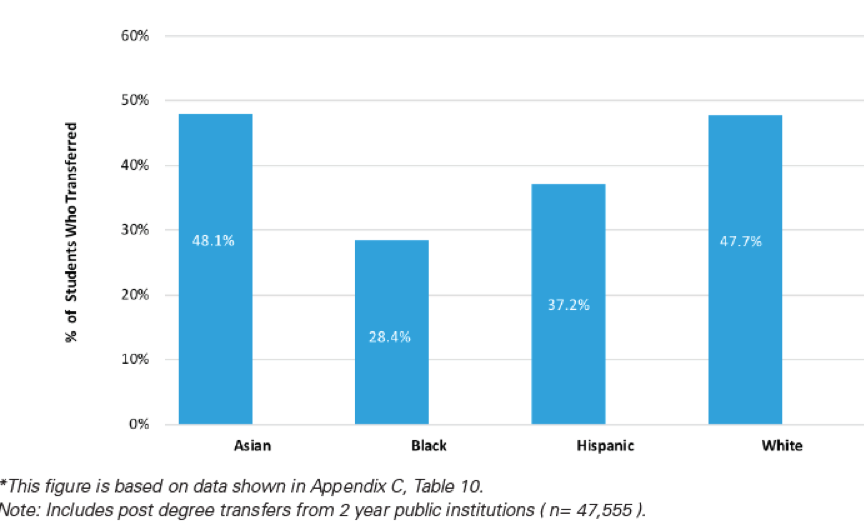 Percent of Transfers from Two-Year Public to Four-Year Public Institutions by Race and Ethnicity, Fall 2011 Cohort