The Clearinghouse went viral on June 27, 2017, when a link to our Reverse Transfer web page made it to the front page of Reddit, one of the internet’s largest forums. With several thousands of interactions and comments, the post encouraged more than 100 users to contact the Clearinghouse with inquiries.

An estimated two million students might qualify for an associate degree via reverse transfer. Through its national Reverse Transfer platform, the Clearinghouse automates the exchange of course and grade data between two- and four-year institutions in order to award associate degrees to eligible students. Like all Clearinghouse services, Reverse Transfer is designed to facilitate an institution’s compliance with FERPA. 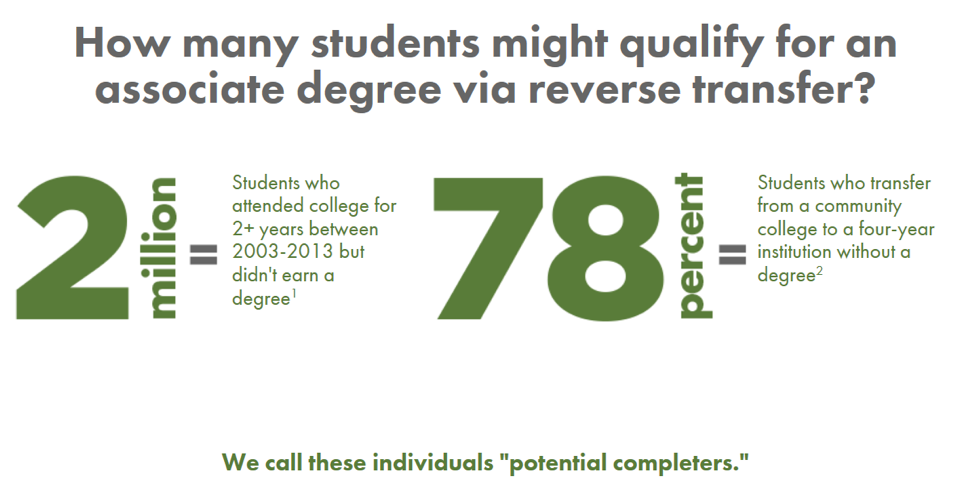 “Reddit really brought attention to it and I’m glad it did — I didn’t know reverse transfer was a thing,” said one student who reached out to the Clearinghouse after reading Reddit’s LifePro Tips post. This student described taking two years at a community college in Kansas, but didn’t finish her associate degree before transferring to a four-year university. The student also said, “I have over 130 credits total, so if I could transfer credits from there back to (my community college) toward a degree that would be so great!”

“It’s exciting to read the great interest in reverse transfer from the public,” said Michelle Blackwell, Clearinghouse National Manager for Reverse Transfer Initiatives. “I speak daily with universities and community colleges about the program, which fills a need for students to earn a college credential. It’s valuable to hear this feedback from interested students and to share this Reddit post with colleges and universities.”

Typically, 60 earned credits are required for an associate degree and 120 earned credits for a bachelor’s degree. In its 2014 Signature Report, Some College, No Degree: A National View of Students with Some College Enrollment, but No Completion, the National Student Clearinghouse Research Center found that 31 million students who enrolled in college during the past 20 years left without receiving a degree or certificate. Almost one-third of this population had minimal interaction with higher education. These students enrolled for just a single term at a single institution, but four million of them made at least two years’ worth of progress and left college less than 10 years ago.

“As more students choose less-traditional paths to a college degree, the population of those who stop out along the way stands to grow,” said Doug Shapiro, Executive Research Director of the National Student Clearinghouse Research Center. “Many colleges and national organizations are interested in drawing this population back to complete their degrees, but research to inform these efforts is still emerging.”

If a student who attended a two-year institution is seeking a reverse transfer degree, please have them contact the registrar or records office at their previously attended institution.

If your institution is interested in Reverse Transfer and wants to talk with Michelle Blackwell, contact her at mblackwell@demo.studentclearinghouse.org or meet her at the State Higher Education Executive Officers Education Policy Conference, which will be held August 8-11, 2017, in Minneapolis. Don’t forget to watch our “Reverse Transfer: A National Solution” on-demand webinar, presented by Michelle, which offers an overview of Reverse Transfer: what it is, how it affects you and your students, and benefits of the service.

“As more students choose less-traditional paths to a college degree, the population of those who stop out along the way stands to grow. Many colleges and national organizations are interested in drawing this population back to complete their degrees, but research to inform these efforts is still emerging.”

Read the full “Some College, No Degree” Signature Report