Undergraduate Degree Earners Increased from 3.4 Million to 3.7 Million, According to New Research Report

The steady increase was largely fueled by students earning their first postsecondary credential before age 25 (traditional college-age students) and graduates who had previously earned one. As a result, adult learners and first-time graduates decreased as a share of all undergraduate degree earners.

“These data show the growing importance of transfer degrees and stacked credentials, with insights into the types of students who are earning them today,” said Doug Shapiro, Executive Research Director. “College enrollment behaviors are changing. We want to give institutions and policymakers the tools they need to adapt to the new realities.” 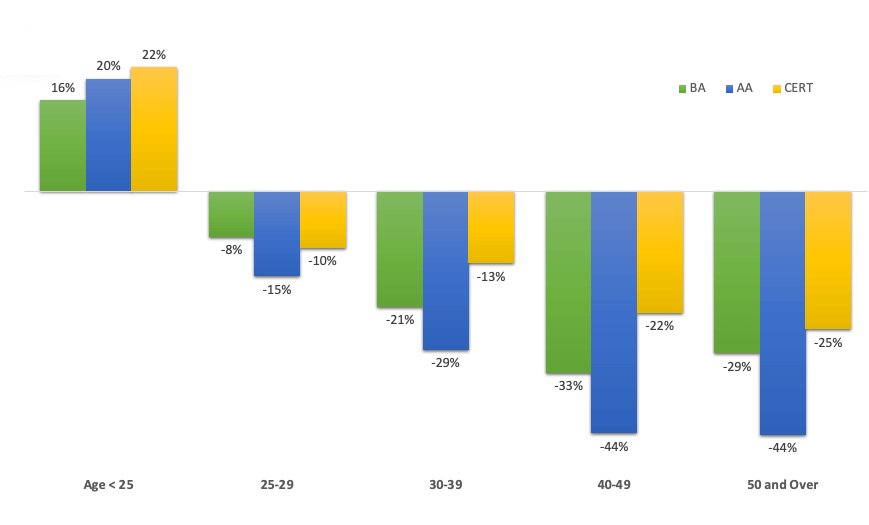 Only Traditional College-Age Group Had an Increase (Percent Change in Number of First-Time Graduates Over Past Six Years Ending in 2019 by Age at Graduation).

More than one quarter of all undergraduate credentials today are awarded to students who already had one (26% or 943,000 graduates), up three percentage points from 2012-13 (see Figure 2 in the Appendix). The share of first-time graduates has decreased, approximately 0.4 percentage points each year over the last six years. The number of graduates with prior awards grew approximately six times faster than first-time graduate numbers over this period (19% versus 3.4%, as shown in Figure 1 in the Appendix).

The Undergraduate Degree Earners report series, published annually, provides a demographic and education profile for all students graduating with an undergraduate credential, which may include associate and bachelor’s degrees and certificates. In this report, we profile graduates in the 2018-19 academic year, with a focus on first-time versus non-first-time graduates, and changes in demographics and education credentials received over the last six academic years, since 2012-13.

“College enrollment behaviors are changing. We want to give institutions and policymakers the tools they need to adapt to the new realities.”